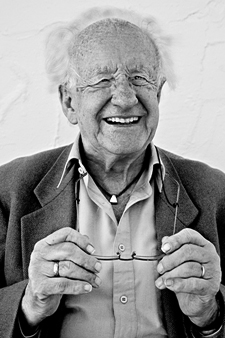 Weltinnenpolitik, was the brilliant formula minted in 1963 by Carl Friedrich von Weizsäcker; nuclear physicist with a dubious career in the Nazi period, philosopher, peace activist, and believing Christian.

The world seen as one polity, one political unit. Not in terms of two levels, the world and the states–canonized as members of the UN – with domestic policies, and “foreign” policies.

“World domestic politics” calls for a world with neither states nor regions but the world as the polity. With LAs, local authorities, but basically with 7 billion+ humans, endowed with human rights and democracy.

A single shiny word, making many think and speak differently. Akin to all formulas giving rise to a number of problematic questions; one more proof of how fruitful this formula was and is. Thus, how can that one world polity organize political, cultural, military and economic power?

Political power: by the people, through direct world elections and referenda, to a world parliament, and on issues;

Cultural power: as a world dialogue of civilizations, meaning mutual learning for a possible world civilization, inside that world polity;

Economic power: by a welfare world lifting up suffering individuals.

We can sense that all four, direct world elections and referenda, world dialogue of civilizations (not only West-Islam), world police and welfare world are waiting back stage to be enacted, and to act. But on stage are states and super-states; singing their swan songs?

Let us try to dig more deeply into this.

We have about 200 domestic state polities – 193 are UN members – can anyone be a model? END_OF_DOCUMENT_TOKEN_TO_BE_REPLACED