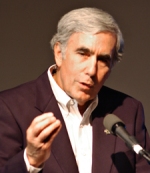 I will begin by sharing two quotations with you. The first is by Jayantha Dhanapala, a Sri Lankan diplomat, former United Nations Under-Secretary General, and long-time and committed leader in the area of nuclear disarmament. He states: “The spectre of the use of a nuclear weapon through political intent, cyber-attack or by accident, by a nation state or by a non-state actor, is more real than we, in our cocoons of complacency, choose to acknowledge.”

The spectre of nuclear use, even nuclear war, is real and most of the world lives in “cocoons of complacency.” It is clear that we must break free from those cocoons, which are as dangerous to the human future as are the nuclear weapons that now imperil us. The Nuclear Zero lawsuits seek to accomplish that.

The second quote is by His Holiness Pope Francis, the leader of the Catholic Church, who has brought new light and compassion to his office. He states: “As long as so great a quantity of arms are in circulation as at present, new pretexts can always be found for initiating hostilities. For this reason, I make my own the appeal of my predecessors for the non-proliferation of arms and for disarmament of all parties, beginning with nuclear and chemical weapons disarmament.” The Pope talks about disarmament in general, but he puts nuclear disarmament, along with chemical weapons disarmament, at the top of his list.

Pope Francis continues: “We cannot however fail to observe that international agreements and national laws — while necessary and greatly to be desired — are not of themselves sufficient to protect humanity from the risk of armed conflict. A conversion of hearts is needed which would permit everyone to recognize in the other a brother or sister to care for, and to work together with, in building a fulfilling life for all.”

Disarmament negotiations have been stuck for some 20 years. The “step-by-step” approach of the nuclear-armed states is not working. There are no negotiations in good faith for nuclear disarmament, as required by international law. There are still over 16,000 nuclear weapons in the world. The use of even a small number of these would destroy civilization or, worse, end complex life on the planet – the only planet we know of in the universe that harbors life.

Nuclear weapons do not so much threaten our amazing planet itself, as they threaten the future of humanity and all the creatures, which are subject, for better or worse, to our stewardship. Over geological time with the passing of hundreds of thousands of years, the Earth will recover from the worst we can do to it. It is ourselves and civilization that we put at risk with our nuclear arsenals. We must have a “conversion of hearts” if we are to save our world, ourselves, and the human future.

The Marshall Islanders are very sympathetic heroes and heroines. For 12 years, from 1946 to 1958, the United States tested nuclear and thermonuclear weapons in the Marshall Islands, causing untold suffering to the islanders. The US tested 67 times, in the atmosphere and underwater. The power of these tests was the equivalent force of testing 1.6 Hiroshima bombs daily for 12 years. This led to countless health problems and premature deaths from cancer and leukemia. It also led to many birth defects and stillbirths. After the Japanese cities of Hiroshima and Nagasaki, no place on the planet has suffered more from nuclear weapons than has the Marshall Islands.

The United States was the trustee of the Trust Territory of the Pacific, which included the Marshall Islands. In this role, the US was responsible for protecting the life and health of the islanders. Instead, the US tested nuclear weapons on their islands, conducted secret radiation experiments on the islanders, and hid information from the islanders so as to evade paying them fair compensation for their pain, suffering and premature deaths. This was criminal behavior; it was certainly not the behavior of a responsible trustee.

With the Nuclear Zero lawsuits, the Marshall Islanders are acting out of compassion. They are not seeking compensation. They are breaking the bonds of complacency. They seek a conversion of the human heart in order to save their islands and the world from the ravages of nuclear weapons. They wish that no other country or people will ever suffer as they have. They have initiated these lawsuits as a public good.

“Our people have suffered the catastrophic and irreparable damage of these weapons, and we vow to fight so that no one else on earth will ever again experience these atrocities. The continued existence of nuclear weapons and the terrible risk they pose to the world threaten us all.” I should note that this is the same perspective as that of the hibakusha, the survivors of Hiroshima and Nagasaki. It is the perspective of all those who have suffered the terrible consequences of nuclear weapons use.

These lawsuits, as I already noted, are about more than just the law. They are about leadership, boldness, courage, justice, wisdom and, ultimately, about survival. Let me say a word about each of these.

Leadership. If the most powerful countries won’t lead, then other countries must. The Marshall Islands, a small island country, has demonstrated this leadership, both on ending climate chaos and on eliminating the nuclear weapons threat to humanity.

Boldness. Many of us in civil society have been calling for boldness in relation to the failure of the nuclear-armed countries to fulfill their obligations to negotiate in good faith to end the nuclear arms race and to achieve complete nuclear disarmament. The status quo has become littered with broken promises, and these have become hard to tolerate. Instead of negotiating in good faith for an end to the nuclear arms race “at an early date,” the nuclear-armed countries have engaged in massive programs of modernization of their nuclear arsenals (nuclear weapons, delivery systems and nuclear infrastructure). Such modernization of nuclear arsenals could cost trillions of dollars and ensure that nuclear weapons are deployed through the 21st century and beyond. The Marshall Islands is boldly challenging the status quo with the Nuclear Zero lawsuits.

Justice. The law should always be about justice. In the case of nuclear weapons, both the law and justice call for an equal playing field, one in which no country has possession of nuclear weapons. That is the bargain of the Nuclear Non-Proliferation Treaty and the requirement of customary international law, and the Marshall Islands is taking legal action that seeks justice in the international community.

Wisdom. The lawsuits are about the wisdom to confront the hubris of the nuclear-armed countries. The arrogance of power is dangerous, and the arrogance of reliance upon nuclear weapons could be fatal for all humanity.

Survival. At their base, the Nuclear Zero lawsuits brought by the Marshall Islands are about survival. They are about making nuclear war, by design or accident, impossible because there are no longer nuclear weapons to threaten humanity. Without nuclear weapons in the world, there can be no nuclear war, no nuclear famine, no overriding threat to the human species and the future of humanity.

The dream of ending the nuclear weapons threat to humanity should be the dream not only of the Marshall Islanders, but our dream as well, our collective dream, not only for ourselves, but for the human future.

I am proud to be associated with the Marshall Islands and its extraordinary Foreign Minister, Tony de Brum. As a consultant to the Marshall Islands, the Nuclear Age Peace Foundation has worked to build the legal teams that support the Nuclear Zero lawsuits. We have also built a consortium of over 50 civil society organizations and individuals supporting the lawsuits. We have also created a way for individuals to add their voices of support with a brief petition. You can find out more and add your voice at the campaign website.

I will conclude with a poem that I wrote recently: “Testing Nuclear Weapons in the Marshall Islands.”

The islands were alive
with the red-orange fire of sunset
splashed on a billowy sky.

The islanders lived simple lives
close to the edge of the ocean planet
reaching out to infinity.

The days were bright and the nights
calm in this happy archipelago
until the colonizers came.

These were sequentially the Spanish,
Germans, Japanese and then, worst of all,
the United States.

The U.S. came as trustee
bearing its new bombs, eager to test them
in this beautiful barefoot Eden.

The islanders were trusting,
even when the bombs began exploding
and the white ash fell like snow.

The children played
in the ash as it floated down on them,
covering them in poison.

The rest is a tale of loss
and suffering by the islanders, of madness
by the people of the bomb.