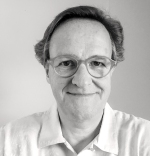 On the occasion of NATO’s defence minister meeting on February 15-16 discussing NATO, Ukraine, Crimea, Syria and the eternal threat images which are fake – with former Assistant Secretary of Defence of the United States, Mr. Lawrence J. Korb.

I’m afraid he got some stuff wrong such as the establishment of NATO and whether or not Kosovo is part of the Balkans.

He also believed that NATO’s 1999 bombing of Serbia-Kosovo had a UN Security Council mandate.

Lots of people in the debate seem to believe there is something strange about being in the “propaganda” media of “enemies of the West” – read the global Iran’s PressTV and Russia’s Russia Today.

What they don’t seem to have acknowledged is that tons of Westerners are being interviewed and do commenting (like myself for years) at these media. Here is Mr. Korb with me at Iran’s international TV channel.

What they also don’t know is something I am sorry to report: I’ve met attempts at manipulation and “editing” and censorship with a series of Western mainstream media, not the least in my native Denmark, but I have not experience any of that even once with Russia Today and PressTV. Very decent professionals!

So much for the free press and for the propaganda channels. My personal problems is, which is which?

2 thoughts on “TFF PressInfo # 403: Discussing NATO with a former US Assistant Secretary of Defence”